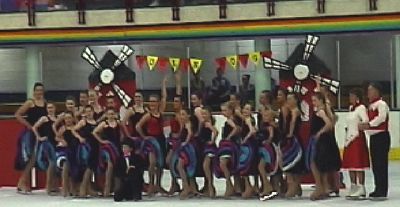 The Isle of Wight Ice Dance & Figure Skating Club achieved its highest ever place at this year’s National Team Challenge, held at Bracknell’s John Nike Centre on Sunday 25 June. The team came third overall, just missing out on second owing to the result of the tie-breaking show event.

The team came home with a total of 53 medals, and took first place in three out of the nine classes entered.

Yelena Brown in her free program, the Wight Diamonds synchro team, and Steve and Carol Taverner in the veterans ice dance all skated best on the day to keep the IW in the top three throughout the competition.

A second place came from Gemma Marsh, skating with an injury but performing a strong routine in the level five and under ladies section. Georgina Bourne, Sarah England, Joanna Tung and Emma Wilks, skating their Addams Family routine, were only just pipped at the post into second spot in the artistic groups.

Gemma Fishel’s Fagin entertained and gained a third place, as did Isabelle Coeshott, who skated to her best result this season in a full event of strong skaters.

Archie Bicknell skated beyond his level in the level 3 boys section and gained a useful fourth place.

Terri Fleming, team coach, choreographed and developed the team to achieve the highest placing for the IW club since the concept of National Team Challenge in 1995.

Overall positions and points were: 1 Chelmsford (50), 2 Guildford (41), 3 Isle of Wight (41), 4 Montem (40), 5 Alexandra Palace (39), 6 Bracknell (32). Chelmsford were deserved winners, dropping only four points overall, but it was still theoretically possible for the IW, lying in second place after the penultimate event, to beat them in the last event, making the competition very close indeed.

Skaters and coach have made history once more this year. We are a small club from a small rink but we have made huge improvements to achieve success and recognition in national competitions.

The Isle of Wight Ice Dance and Figure Skating Club will be putting on several summer shows during August and September. Please contact Planet Ice Arena, Ryde, for times and dates.